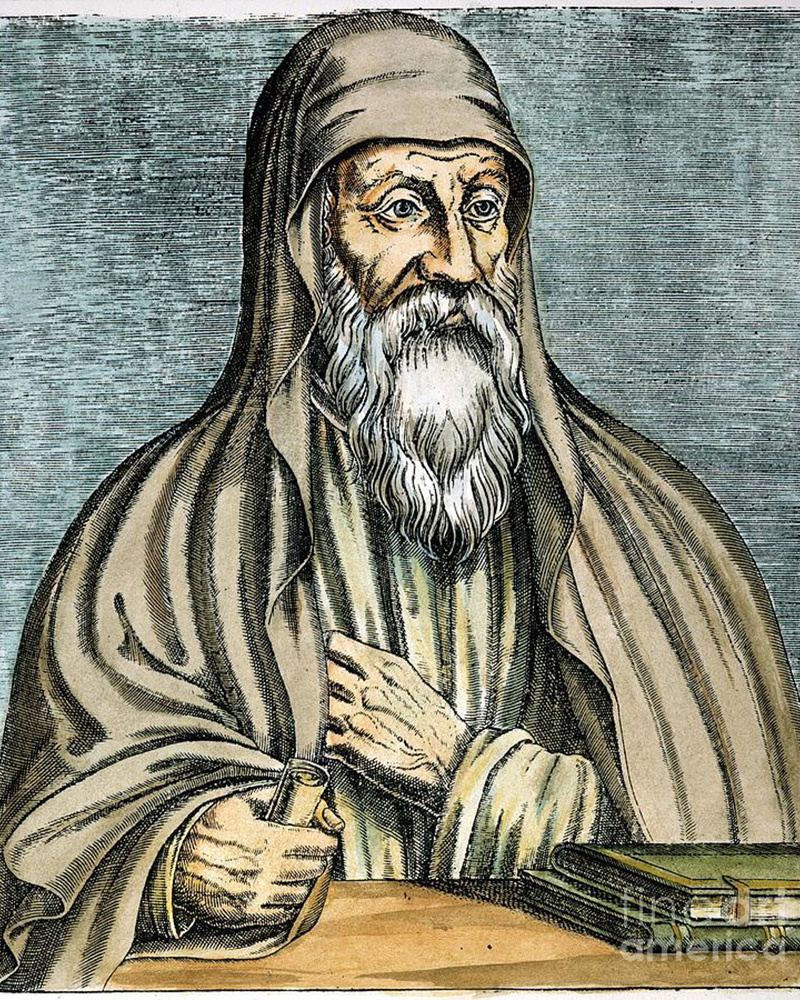 O rigen or Origen Adamantius was a Greek scholar, ascetic, and early Christian theologian who was born and spent the first half of his career in Alexandria. He was a prolific writer in multiple branches of theology, including textual criticism, biblical exegesis and hermeneutics, philosophical theology, preaching, and spirituality written in Greek. He was anathematised at the Second Council of Constantinople. He was one of the most influential figures in early Christian asceticism.

Hayagriva dasa: Origen is generally considered the founder of formal Christian philosophy, because he was the first to attempt to establish Christianity on the basis of philosophy as well as faith. He believed that the ultimate spiritual reality consists of the supreme, infinite Person, God, as well as individual personalities. Ultimate reality may be defined as the relationships of persons with one another and with the infinite Person Himself. In this view, Origen differs from the Greeks, who were basically impersonalists.

Srila Prabhupada: Our Vedic conception is almost the same. Individual souls, which we call living entities, are always present, and each one of them has an intimate relationship with the Supreme Personality of Godhead. In material conditional life, the living entity has forgotten this relationship. By rendering devotional service, he attains the liberated position and at that time revives his relationship with the Supreme Personality of Godhead.

Hayagriva dasa: Origen ascribed to a doctrine of the Trinity, in which God the Father is supreme. God the Son, called the Logos, is subordinate to the Father. It is the Son who brings the material world into existence. That is, God the Father is not the direct creator; rather, it is the Son who creates directly, like Lord Brahma. The third aspect of the Trinity is the Holy Spirit, who is subordinate to the Son. According to Origen, all three of these aspects are divine and co-eternal. They have always existed simultaneously as the Trinity of God.

Srila Prabhupada: According to the Vedas, Krsna is the original Personality of Godhead. As confirmed by Bhagavad-gita: aham sarvasya prabhavah. "I am the source of all spiritual and material worlds." (Bg. 10.8) Whether you call this origin the Father, Son, or Holy Spirit, it doesn't matter. The Supreme Personality of Godhead is the origin. According to the Vedic conception, there are two types of expansion: God's personal expansions, called Visnu-tattva , and His partial part-and-parcel expansions called jiva-tattva. There are many varieties of personal expansions:purusa-avataras, saktyavesa-avataras, manvantara-avataras, and so on. For the creation of this material world, the Lord expands as Brahma, Visnu, and Mahesvara (Siva). Visnu is a personal expansion, and Brahma is a jiva- tattva expansion. Between the personal Visnu-tattva expansion and the jiva-tattva expansion is a kind of intermediate expansion called Siva, or Mahesvara. The material ingredients are given, and Brahma creates the particular creation. Visnu maintains the creation, and Lord Siva annihilates it. It is the nature of the external potency to be created, maintained, and dissolved. More detailed information is given in the Caitanya-caritamrta. In any case, the jivas, or living entities, are all considered to be sons of God. They are situated in one of two positions: liberated or conditioned. Those who are liberated can personally associate with the Supreme Personality of Godhead, and those who are conditioned within this material world have forgotten the Supreme Lord. Therefore they suffer within this material world in different bodily forms. They can be elevated, however, through the practice of Krsna consciousness under the guidance of the sastras and the bona fide guru.

Hayagriva dasa: Origen believed that it is through the combined working of divine grace and man's free will that the individual soul attains perfection, which consists of attaining a personal relationship with the infinite Person.

Srila Prabhupada: Yes, and that is called bhakti-marga. The Absolute Truth is manifested in three features: Brahman, Paramatma, and Bhagavan. Bhagavan is the personal feature, and the Paramatma, situated in everyone's heart, may he compared to the Holy Spirit. The Brahman feature is present everywhere. The highest perfection of spiritual life includes the understanding of the personal feature of the Lord. When one understands Bhagavan, one engages in His service. In this way, the living entity is situated in his original constitutional position and is eternally blissful.

Hayagriva dasa: Origen considered that just as man's free will precipitated his fall, man's free will can also bring about salvation. Man can return to God by practicing material detachment. Such detachment can be made possible by help from the Logos, the Christ.

Srila Prabhupada: Yes, that is also our conception. The fallen soul is transmigrating within this material world, up and down in different forms of life. When his consciousness is sufficiently developed, he can be enlightened by God, who gives him instructions in the Bhagavad-gita. Through the spiritual master's help, he can attain full enlightenment. When he understands his transcendental position of bliss, he automatically gives up material bodily attachments. Then he attains freedom. The living entity attains his normal, constitutional position when he is properly situated in his spiritual identity and engaged in the service of the Lord.

"One who is thus transcendentally situated at once realizes the Supreme Brahman. He never laments nor desires to have anything; he is equally disposed to every living entity. In that state, he attains pure devotional service unto Me." (Bg. 18.54) In this position, one sees all living entities as spirit souls; he does not see the outward covering. When he sees a dog, he sees a spirit soul covered by the body of a dog. This state is also described in Bhagavad-gita.

“The humble sage, by virtue of true knowledge, sees with equal vision a learned and gentle brahmana, a cow, an elephant, a dog, and a dog-eater [outcaste]." (Bg. 5.18) When one is in the body of an animal, he cannot understand his spiritual identity. This identity can best be realized in a human civilization in which the varnasrama system is practiced. This system divides life into four asramas ( brahmana, ksatriya, vaisya, and sudra), and four varnas (brahmacari, grhastha, vanaprastha, and sannyasi). The highest position is that of a brahmana-sannyasi, a platform from which one may best realize his original constitutional position, act accordingly, and thus attain deliverance, or mukti. Mukti means understanding our constitutional position and acting accordingly. Conditional life, a life of bondage, means identifying with the body and acting on the bodily platform. On the mukti platform, our activities differ from those enacted on the conditional platform. Devotional service is rendered from the mukti platform. If we engage in devotional service, we maintain our spiritual identity and are therefore liberated, even though inhabiting the conditional, material body.

Hayagriva dasa: Origen also believed that the interior man, or the spiritual body, also has spiritual senses that enable the soul to taste, see, touch, and contemplate the things of God.

Hayagriva dasa: During his lifetime, Origen was a famous teacher and was very much in demand. For him, preaching meant explaining the words of God and no more. He believed that a preacher must first be a man of prayer and must be in contact with God. He should not pray for material goods but for a better understanding of the scriptures.

Srila Prabhupada: Yes, that is a real preacher. As explained in Vedic literatures: sravanam kirtanam. First of all, we become perfect by hearing. This is called sravanam. When we are thus situated by hearing perfectly from an authorized person, our next stage begins: kirtana, preaching. In this material world, everyone is hearing something from someone else. In order to pass examinations, a student must hear his professor. Then, in his own right, he can become a professor himself. If we hear from a spiritualized person, we become perfect and can become real preachers. We should preach about Visnu for Visnu, not for any person within this material world. We should hear and preach about the Supreme Person, the transcendental Personality of Godhead. That is the duty of a liberated soul.

Hayagriva dasa: As far as contradictions and seeming absurdities in scripture are concerned, Origen considered them to be stumbling blocks permitted to exist by God in order for man to pass beyond the literal meaning. He writes that "everything in scripture has a spiritual meaning, but not all of it has a literal meaning."

Hayagriva dasa: For Origen, there are two rebirths. The first is a baptism, which is something like a mystical union between Christ and the soul. Baptism marked the first stage in spiritual life: from there, one could regress or progress. Baptism is compared to a shadow of the ultimate rebirth, which is complete purification and rebirth in the spiritual world with Christ. When the soul is reborn with Christ, it receives a spiritual body like Christ and beholds Christ face to face.

Srila Prabhupada: What is the position of Christ?

Hayagriva dasa: He is seated at the right hand of the Father in the kingdom of God.

Srila Prabhupada: But when Christ was present on earth, many people saw him.

Srila Prabhupada: Is it that Christ is seen in his full spiritual body?

Hayagriva dasa: When the soul is reborn with Christ, it beholds Christ's spiritual body through its spiritual senses.

Srila Prabhupada: Yes. We also think in this way.

Hayagriva dasa: Origen did not believe that the individual soul has been existing from all eternity. It was created. He writes: "The rational natures that were made in the beginning did not always exist; they came into being when they were created."

Hayagriva dasa: Origen differed from later Church doctrine in his belief in transmigration. Although he believed that the soul was originally created, he also believed that it transmigrated because it could always refuse to give itself to God. So he saw the individual soul as possibly rising and falling perpetually on the evolutionary scale. Later Church doctrine held that one's choice for eternity is made in this one lifetime. As Origen saw it, the individual soul, falling short of the ultimate goal, is reincarnated again and again.

Srila Prabhupada: Yes, that is the Vedic version. Unless one is liberated and goes to the kingdom of God, he must transmigrate from one material body to another. The material body grows, remains for some time, reproduces, grows old, and becomes useless. Then the living entity has to leave one body for another. Once in a new body, he again attempts to fulfill his desires, and again he goes through the process of dying and accepting another material body. This is the process of transmigration.

Hayagriva dasa: It is interesting that neither Origen nor Christ rejected transmigration. It wasn't until Augustine that it was denied.

Srila Prabhupada: Transmigration is a fact. A person cannot wear the same clothes all of his life. Our clothes become old and useless, and we have to change them. The living being is certainly eternal, but he has to accept a material body for material sense gratification, and such a body cannot endure perpetually. All of this is thoroughly explained in Bhagavad-gita.

"As the embodied soul continuously passes, in this body, from boyhood to youth to old age, the soul similarly passes into another body at death. The self-realized soul is not bewildered by such a change." (Bg. 2.13)

"The living entity in the material world carries his different conceptions of life from one body to another, as the air carries aromas." (Bg. 15.8)