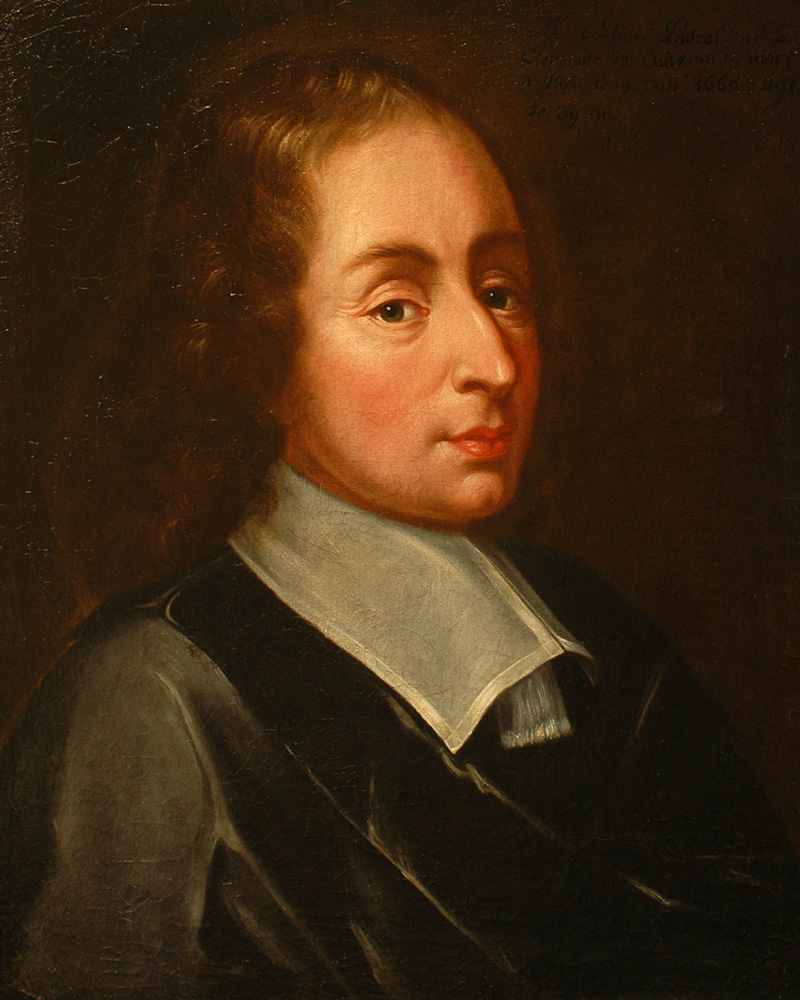 B laise Pascal was a French mathematician, physicist, inventor, writer and Christian philosopher. He was a child prodigy who was educated by his father, a tax collector in Rouen. Pascal's earliest work was in the natural and applied sciences where he made important contributions to the study of fluids, and clarified the concepts of pressure and vacuum by generalising the work of Evangelista Torricelli. Pascal also wrote in defence of the scientific method.

Hayagriva dasa: Pascal saw man situated in the universe between two extremes: infinity and nothingness. Man has a body like the animals, and an intellect like the angels or demigods. As such, he is neither a demigod nor an animal but somewhere between the two. He is intelligent enough to know that he is in a miserable situation, despite his great desire to be happy. Man engages in all kinds of pastimes and diversions to forget his misery, but nothing ultimately helps. What man once possessed and now has lost is perfect happiness. All men suffer and complain, despite their situation, and Pascal believed that the emptiness felt by man can only be filled by God.

Srila Prabhupada: Yes, life after life, the living entity strives for happiness, but he only becomes more morose because he does not take shelter of Krsna. He manufactures new ways to sport. He dives in the water, and flies in the air, and God is supplying him all facilities. If you want to fly, become a bird. If you want to dive, become a fish. Sometimes, after making many attempts to be happy, the living entity gives up his planmaking and surrenders to Krsna. Krsna says, "Surrender unto Me, and I will make you happy." God comes personally as Lord Ramacandra, Lord Krsna, and Lord Caitanya Mahaprabhu to give instructions how to surrender and attain happiness.

Hayagriva dasa: Whereas Descartes emphasized the importance of reason, Pascal believed that the principles that are understood by the heart are absolutely certain and adequate to overcome all skepticism and doubt. Is this because the Supersoul speaks within the heart?

"To those who are constantly devoted and worship Me with love, I give the understanding by which they can come to Me." (Bg. 10.10) Every living entity is living with God, but out of ignorance he does not know this. As we have stated before, there are two birds situated in the tree of the body. One bird is enjoying the fruits of the tree, while the other bird is witnessing. God gives instructions whereby we can return home, but nondevotees will not accept these instructions. A devotee strictly follows the orders of God, but the demoniac act according to their own whims, even though knowing God's desires. There is no doubt that God is giving instructions. Instructions are given externally through God's agent, the spiritual master, and through the scriptures. Instructions are given internally through the conscience, the Supersoul.

Syamasundara dasa: Pascal was a mystic who believed very deeply in God, but he was also a skeptic in the sense that he believed that we cannot prove the existence of God by our reason or any other way. Therefore he emphasized that we have to believe in God with our heart.

Srila Prabhupada: Yes, that is a fact. You cannot prove the existence of God by your material senses.

"Material senses cannot appreciate Krsna's holy name, form, qualities and pastimes. When a conditioned soul is awakened to Krsna consciousness and renders service by using his tongue to chant the Lord's holy name and taste the remnants of the Lord's food, the tongue is purified, and one gradually comes to understand who Krsna really is." (Padma Purana) The senses are incompetent to appreciate God, but if you are anxious to know God, you should render Him service. Then He will let you know what He is. The more we engage in God's service, the more He reveals. He cannot be perceived by our senses; therefore His name is adhoksaja, which means that He is beyond our sense perception. We worship the Deity of God in the temple, but the gross materialist with his sense perception can never understand that the Deity is God. He will say that it is simply a stone carving. Therefore we have to believe in God with our heart. Because the atheist does not believe in God with his heart, he sees only a piece of stone.

Syamasundara dasa: Pascal says that the heart has reasons which the mind does not know.

Hayagriva dasa: Pascal ascribed to the doctrine of original sin, which holds that at one time man fell from grace by committing some sin or other, and this fall from grace accounts for his present position between the angels and the beasts. In other words, original sin accounts for man's encagement in matter.

Srila Prabhupada: Yes. This is also our philosophy.

Hayagriva dasa: What was this original sin?

Srila Prabhupada: Disobedience—refusing to serve Krsna. Sometimes a servant thinks, "Why am I serving this master? I myself must become a master." The living entity is eternally part and parcel of God, and his duty is to serve God. When he thinks, "Why should I serve God? I shall enjoy myself instead," he brings about his downfall. Original sin means refusing to serve God and attempting instead to become God. Mayavadis, for instance, are still attempting to become God, despite their knowledge and philosophy. If by meditation or some material effort, we can become God, what is the meaning of God? It is not possible to become God. The attempt to become God is the original sin, the beginning of sinful life.

Hayagriva dasa: Pascal believed that it is impossible for man to understand the universe or his position in it. We cannot look for certainty or stability in the material world because our reasoning powers are always being deceived. Therefore man must surrender to the dictates of his heart and to God.

Srila Prabhupada: Yes, that is our position. We are not depending on the heart, however, because the dictations of the heart are not appreciated by nondevotees. Direct instructions are given in Bhagavad-gita and explained by the spiritual master. If we take the advice of God and His representative, we will not be misled.

Hayagriva dasa: Of all things in the world, Pascal considered this to be the strangest: "A man spends many days and nights in rage and despair over the loss of his job or for some imaginary insult to his honor, yet he does not consider with anxiety and emotion that he will lose everything by death. It is a monstrous thing to see in the same heart and at the same time this sensibility to trifles and the strange insensibility to the greatest objects (death). It is an incomprehensible enchantment, and a supernatural slumber, which indicates as its cause an all-powerful force."

Srila Prabhupada: Yes, according to Bhagavad-gita, when one does not believe in God, or when one disobeys God's orders, God comes as death. Then all power, pride, imagination, and plans are broken. After this, one may attain the body of an animal because in his life he acted like an animal. This is the process of transmigration. This is suffering.

Srila Prabhupada: Yes that is a fact. The orders of God constitute religion, and if we carry out these orders, we are religious. Pseudo-religions, religions that cheat, are condemned in Srimad-Bhagavatam. Any religious system which has no conception of God and which annually changes its resolutions is not a religion but a farce.

Hayagriva dasa: Pascal seems to be saying that we should not accept our faith blindly, but at the same time we should not expect everything to be comprehensible to our understanding.

Srila Prabhupada: Yes. A father may tell his child to do something, although the child may not comprehend it. In any case, we understand that the father's plans are complete and good for the son. If the son says, "No, I don't wish to do this," he may fall down. God's orders constitute religion, but there is no question of blind following. We must understand God's nature and realize that He is all perfect. In this way, we can understand that whatever He says is also perfect and that we should therefore accept it. If we apply our finite reasoning and try to change God's instructions according to our whims, we will suffer.

Syamasundara dasa: Pascal claims that by faith we have to make a forced option, or what he calls a religious wager. We either have to cast our lot on the side of God—in which case we have nothing to lose in this life and everything to gain in the next—or we deny God and jeopardize our eternal position.

Syamasundara dasa: Pascal says that there is a fifty-fifty chance.

Syamasundara dasa: Pascal also advocated that. We have nothing to lose and everything to gain.

Srila Prab hupada: Yes. We also advise people to chant Hare Krsna. Since you have nothing to lose and everything to gain, why not chant?

Syamasundara dasa: Pascal's religious wager rests upon the assumption that God will punish the individual who refuses to believe in Him, and reward the one who believes.

Srila Prabhupada: Well, God is the Supreme Person who rewards and punishes. Lord Visnu has four hands holding four symbolic objects. Two hands are for punishment, and two for protection. The conch shell and lotus give protection to the devotees, and the club and disc punish the nondevotees.

Srila Prabhupada: Yes. Srimad-Bhagavatam points out that we are trying to live long, but a tree lives longer. Does this mean that the tree has attained perfection? Does perfection mean longevity? We may analyze life's conditions in this way in order to understand that perfection means coming to God consciousness and understanding God and our relationship with Him.

Hayagriva dasa: For Pascal, knowledge can be attained only by curbing the passions, submitting to God, and accepting God's revelation. He considered himself a Christian.

Srila Prabhupada: Yes, without religion, one is an animal. Amongst animals, there is no discussion of God and no sense of religion. Presently, society is becoming degraded because governments are forbidding the discussion of God in schools and colleges. This causes increased suffering.

Hayagriva dasa: Although Pascal was considered a great philosopher, he concluded that philosophy in itself only leads to skepticism. Faith is needed. "Hear God" was his favorite motto.

Srila Prabhupada: Philosophy means understanding the truth. Sometimes philosophers spend their time speculating about sex and thus become degraded. Sex is present in animals as well as man. Sex is not life itself; it is only a symptom of life. If we emphasize only this symptom, the results are not philosophy. Philosophy means finding out the Absolute Truth. The real subject of philosophy is Brahman, Paramatma, and Bhagavan.