H is Divine Grace A.C. Bhaktivedanta Swami Prabhupada (1896-1977) is widely regarded as the foremost Vedic scholar, translator, and teacher of the modern era. He is especially respected as the world's most prominent contemporary authority on bhakti-yoga, devotional service to the Supreme Person, Krishna, as taught by the ancient Vedic writings of India. He is also the founder-acharya of the International Society for Krishna Consciousness.

Srila Prabhupada, as he's known to his followers, translated and commented on over eighty volumes of the Vedas' most important sacred bhakti texts, including the Bhagavad-gita—a concise handbook for understanding the purpose and goal of human life—and the multi-volume Srimad-Bhagavatam—an epic biography of Krishna, Krishna's avatars, and His many devotees throughout the history of the universe.

Srila Prabhupada's own spiritual master, Srila Bhaktisiddhanta Sarasvati Thakur, was the leading proponent of Krishna consciousness in India during the early part of the twentieth century. He specifically taught the philosophy of Chaitanya Mahaprabhu, the divine avatar who revived Krishna-bhakti all over India in the 1500s. When Srila Bhaktisiddhanta first met the young man later known as Srila Prabhupada - in Calcutta in 1922 - he urged him to preach Chaitanya Mahaprabhu's message of Krishna consciousness throughout the English-speaking world.

After forty years of struggling within India to carry out his guru's order, while maintaining family and business responsibilities, Srila Prabhupada boarded a steamship bound from Calcutta to New York City in 1965. At age sixty-nine, with forty rupees and a trunk of his Bhagavatam commentaries - the first ever in English - his aim was to introduce "India's message of peace and goodwill" to the western world. During the last twelve years of his life, Srila Prabhupada would inspire thousands of Westerners and Indians to devote their lives to Krishna consciousness, launching one of the fastest-growing spiritual movements in the history of the world.

Many scholars and professors who met him and became familiar with his work continue to use Srila Prabhupada's books as standard university texts, and regard him as a genuine, realized, and scholarly teacher of bhakti. His authoritative yet down-to-earth presentation of Vedas continues to inspire a worldwide audience.

With the help of his students, he founded the International Society for Krishna Consciousness (ISKCON). ISKCON is popularly known as the "Hare Krishna" movement, due to its members' widespread practice of chanting the Hare Krishna mantra in public. Srila Prabhupada intended ISKCON to facilitate the association and education of bhakti-yoga practitioners, and his followers continue to spread that mission. 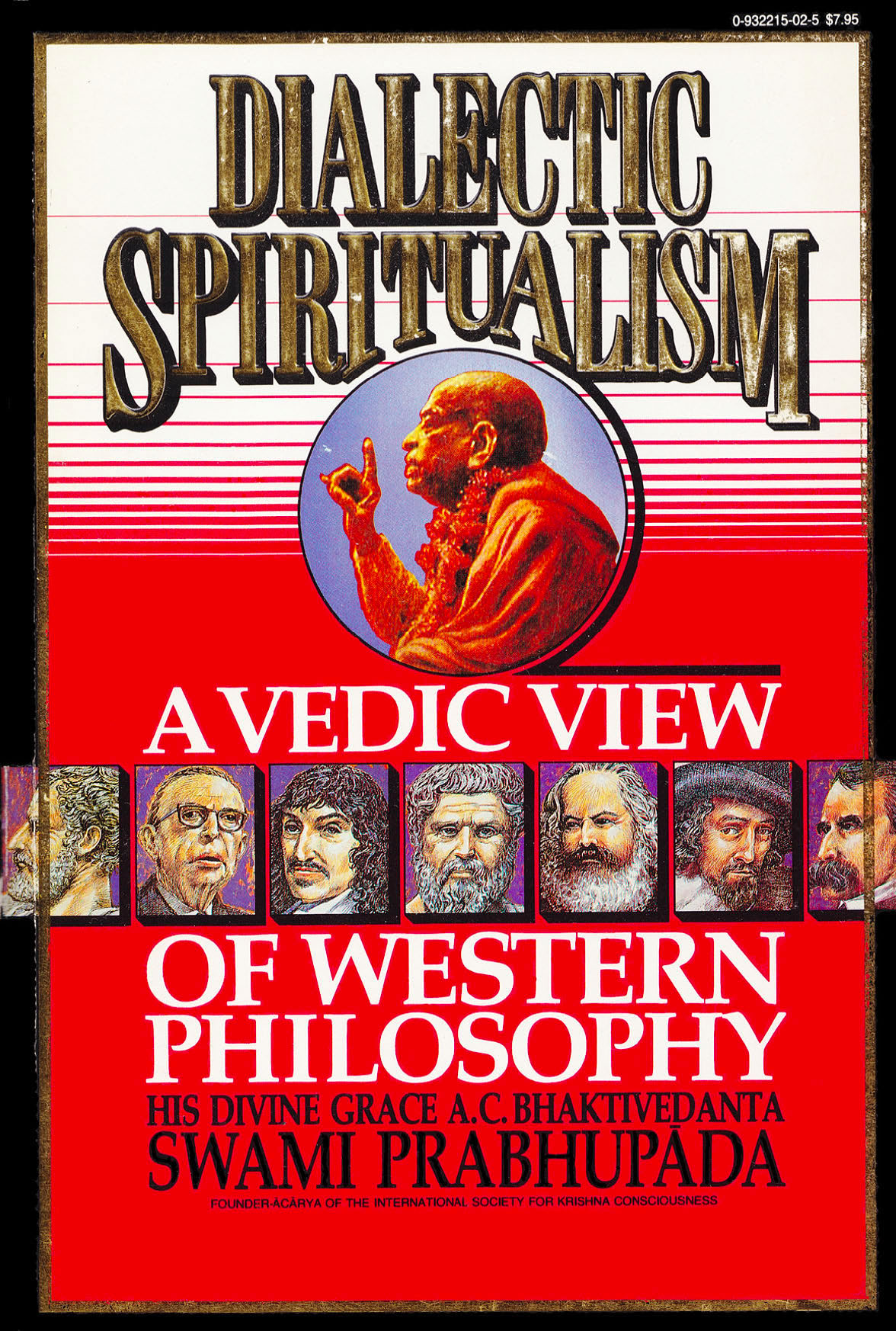 T he idea for this book first emerged in 1973, when Srila Prabhupada began asking his secretary, Syamasundara dasa adhikari (Sam Speerstra), about Western philosophy. Syamasundara would try to state succinctly the major ideas of certain philosophers, and Prabhupada would give the Vedic view. As Prabhupada traveled throughout the world preaching Krsna consciousness, this process continued, until finally, in 1976, Prabhupada's editor, Hayagriva dasa adhikari (Professor Howard Wheeler), supplied further questions for Prabhupada and completed the editing. Then Srila Prabhupada gave the book its title: Dialectic Spiritualism: A Vedic View of Western Philosophy, and said, "Print it."

Almost immediately some people objected that since professional scholars had not presented the material to Srila Prabhupada, there might be some discrepancies. When the manuscript was shown to a philosophy professor, he called it "a treatise against philosophy," and "an unscholarly punch in the nose." Then, when Srila Prabhupada left this mortal world in November, 1977, the book's future became uncertain. One student tried to restate the questions. Then another tried, only to conclude that it would be better to start all over. But Srila Prabhupada was no longer present, and the extensive work, on which he had spent so much time, remained unavailable to the world. Finally, in 1984, Hayagriva resolved to print Srila Prabhupada's last great opus as it is, and for this we are all greatly indebted.

Whatever the criticisms, they are rendered insignificant in the light of Srila Prabhupada's brilliant insights into the problems of Western philosophy and his lucid expositories of the Vedic view. Much of the confusion arises from a difference in methodology and perspective. For many Westerners, philosophy is a kind of armchair speculation, an intellectual game, but for the follower of the Vedas, it is a matter of life and death. Or, more precisely, it is the recognition of the absolute need to stop the repetition of birth and death.